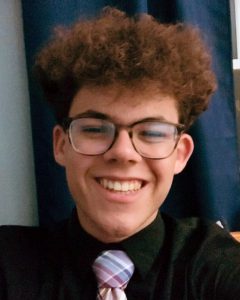 Each district is divided into territories called divisions, made up of various clubs. Each division has a lieutenant governor, a student leader who carries out the district’s policies and provides support to the clubs. The Key Club is the oldest and largest service program for high school students in the world.

As the Division 13 Lieutenant Governor, Andrew, a second year Key Club member, will also serve on the New York District board, and is one of 27 students who will represent 300 high schools and over 12,000 high school students statewide. Locally, he will lead the nine clubs as its chief executive officer in the Hudson Valley region.

This past year, Andrew served as club secretary and was appointed a member representative on the NYDKC District Affairs Committee.

He and other NYDKC lieutenant governors will be inaugurated during the NYDKC 2022 Leadership Training Conference in Albany.

“Antonella´s dedication, perseverance and unmeasured enthusiasm this past year is a great example of what true service leadership should look like,” said David Morse,  Kiwanis Committee Representative and New York District of Kiwanis executive assistant.