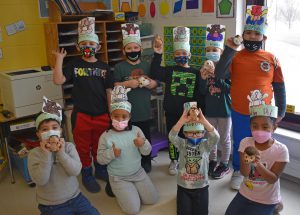 Special days of the month, like today’s Groundhog Day, allow Minisink Valley faculty to creatively tie in those days into teachable moments.

At Otisville Elementary,  for example, first-grade teachers Melanie Amatetti and Gemma Lyon’s Otisville first-graders shared Groundhog Day facts and myths with their students, tieing into social studies work. They also were introduced to the science behind prediction making and made hats to wear to mark the day.

Some students also had the opportunity to practice their public speaking skills while sharing the results of a schoolwide vote, “Will the Groundhog see his shadow?” and other facts during morning announcements.  The school vote itself was an exercise in the Democratic process of a  group making a collective decision or expressing an opinion. 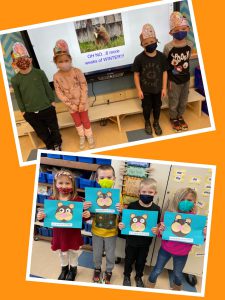 In another example, Jennifer DiSimone’s Elementary School first-graders combined  the “fun” of day with science, math and art.

Students talked about what a prediction is and making a “smart guess.” They tallied their votes (which perfectly aligned with their tally/graph math work) and created a data chart after we voted on our predictions, often used in science work. They also watched a Brain Pop video, read a Groundhog Day story, made hats and finished a groundhog art project.