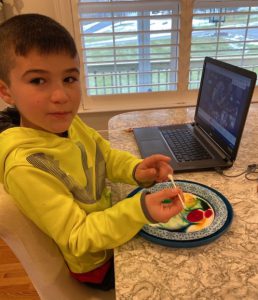 What do you get when you combine full fat milk, food coloring, dish soap and cotton swabs with a first-grade remote learning STEM lesson about chemical properties and chemical bonding?

The answer: The Magic Milk Experiment!

“I adapted this for remote learning by giving an explanation of what supplies would be needed for the experiment and how I would do it,” said Mrs. McDermott. “If they did not have supplies they could observe as I did it.  As the students were on the meet I did step-by-step instructions of how to do the experiment as I was modeling.”

The workings of colorful molecules 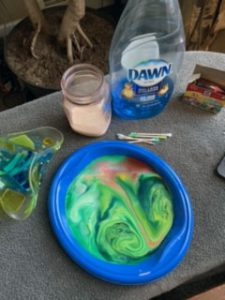 Milk contains vitamins, proteins, minerals, and fats in addition to water. The fat and protein molecules are sensitive to changes in the environment.

Soap is known as a non-polar molecule. When the soap is added to the milk, the soap molecules bond with the non-polar fat molecules. This causes the fat and soap to be carried quickly across the surface of the polar water molecules.

The use of food coloring helps students to see this actually happening. The soap heads for the fats, creating the cool bursting of color. When there is no more movement, all the fat molecules have been found.

As part of their at-home experiment, the young scientists talked about  — in more simplistic language —  what happened when they put the cotton swab in the milk and why they think that happened, what happened when food coloring was added to the mixture and other observations. 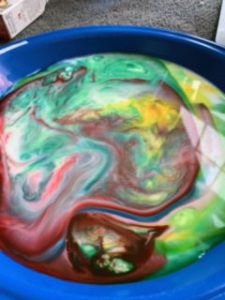 No two magic milk experiments will ever be the same, students learned, and they were amazed to see how easy it was to turn ordinary milk into a rainbow of crazy colors.

“I have done lots of science experiments but this was the ‘bestest’ one,” said Michael Juncaj. “I got colors of pink, green and yellow.”

“My milk looks like the earth,” said Charlotte Todd.

“At first my experiment did not turn out right but then when I did it again, it worked,” he said. “A true scientist!” 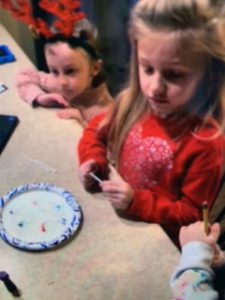 Ryleigh Korsakoff made her work a family affair.

“I really like the experiment and my sisters were doing it too,” she said.

Try this at home!

It’s easy to try at home, and using 1 percent or 2 percent milk (which contains less fat) will offer a different outcome than regular milk.

“So many tried it again or with different materials, like syrup, to see what would work,” added Mrs. McDermott, who posted the experiment on the Seesaw platform so students could try it later.