Minisink Valley Central School District > Archive > The show will go on! High School Drama Club to present virtual performances of ‘Alice in Wonderland’ on May 24 and 25

The Minisink Valley High School Drama Club will present Lewis Carroll’s “Alice in Wonderland,” with virtual performances on Monday, May 24 and Tuesday, May 25 at 7 p.m. 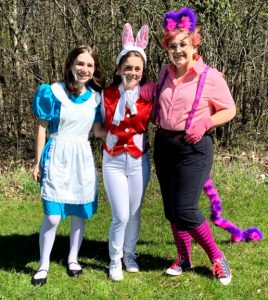 This year, drama club members creatively reimagined the how they could present a spring community performance, after last year’s spring performance of “Mary Poppins” was cancelled at the onset of the COVID-19 pandemic.  Work began on March 12, when members received a Google classroom message saying a way was found to stage a show.

“Not being able to have our production last year was devastating, and the possibility of not having one this year was even more so,” said Junior Molly Dubner, who plays the March Hare.  “I am so thankful for the people in our community who have ‘given it their all’ to give us a drama production this year. This production means everything to me not only because I love to perform, but because I get to be with my family again.”

Auditions fell into place, script readings began, costumes were made and props and backdrops were built. Different from last year is the entire performance is filmed. 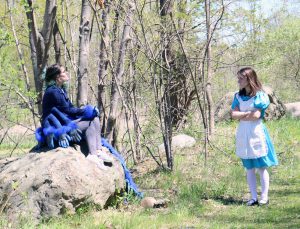 By the end of April, filming was in full swing, with cast and crew devoting hours of time to make this performance to be the best possible one. Final editing is taking place now.

“Everything about this production has been unique,” said Sophomore Anya Speranza, who plays Alice, noting cast and crew overcame the challenges of filming most of the scenes outside.

“It’s really exciting to have a drama production this year, especially since we almost didn’t,” said Junior Noah McGinnis, who plays the Mad Hatter.  He added the experience has been incredible and different from regular drama productions.

Success at doing something never before attempted

“We’ve put together a project that we’ve never done before in an unprecedentedly short amount of time, and its quality holds up just as well as a live show that we’ve had an entire season to work on,” added Freshman Tech Crew member Andrew Hines. “This year has been hard for a lot of people, so if even just one person can take away something positive from our production, it will all have been worth it.” 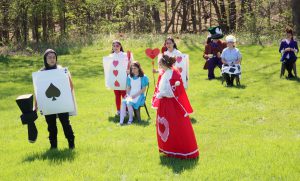 Cast and crew were grateful to Drama Club advisors Laura Hulle, Danielle Cornacchio and Club President Joey Colantuono for their commitment to find a way to make a spring performance a reality.

“I will have one final show,” said Senior Alyson Morse, who plays The Duchess, adding “these uncertain times have been pretty dark for everyone, but performing this play has created a light for so many of us drama kids and our families.”

Freshman Tech Crew member Anthony Gallagher stressed a drama production like this has ever been attempted.

“Minisink has gone and warped the otherwise ‘normal’ ways for drama, and brought upon a safer procedure for all of us to still do what we love,” he said. “We’ve recorded the scenes you would otherwise watch on a stage and edited together.”

‘We are all together’

Equally important is the return of social camaraderie, even if it’s different from prior years.

“We get to have our family back together as one,” added Sophomore Set Crew member Nevaeh Herbert, “even if we have to stay distanced and wear masks, at least we are all together.”

Tickets are $5 per night and will be streamed via the ShowShare platform.

Visit these links to buy tickets: