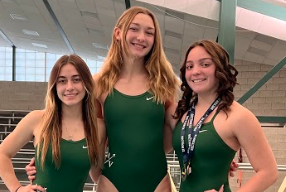 Congratulations to the three members of the Girls Varsity Swimming and Diving team who qualified to compete in the upcoming New York State competition in Rochester later this month as a result of performances during the recent Section IX championship meets.

The team placed ninth overall in the championship competition, but Senior Micheala Hujus placed first in the 50m and 100m freestyle events. She broke her previous held record in the 100m and the previous school record for the 50m.

Junior Anastasia Albornoz placed sixth in diving, surpassing the qualifying score to send her to the state championship.