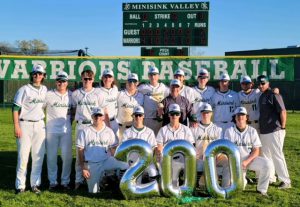 Congratulations to Minisink Valley Varsity Baseball Head Coach Dave Benedetto, who earned his 200th career win on May 9 when the Warriors beat the Monticello Panthers in a 6-2 win.

Coach Benedetto’s coaching career began in 1990 at John S. Burke Catholic High School. In his four years there, he coached the team to a Conference championship and Section finals twice.

He joined Minisink Valley in 1994. From 1994 to 2008, his baseball career has included working with the district’s modified and junior varsity teams. He was also varsity assistant coach.

Coach Benedetto has served as the district’s ‘varsity baseball coach since 2009.  He earned his 100th coaching career win in 2013, when the team was Division and Section champions. He was also named the 2013 Coach of the Year.

“This is an incredible accomplishment that few baseball coaches ever achieve,” said Athletic Director Tim Bult. “Coach Benedetto is one of the most skilled and hardest working coaches there is, and he’s committed to his students’ success, both on and off the field. He’s a stickler for good sportsmanship and playing the game with integrity and grit. That’s why our varsity team is so outstanding. We’re thrilled to see him reach this wonderful coaching milestone. This achievement is even more special because it was earned on our home field and our Senior Recognition Day.”