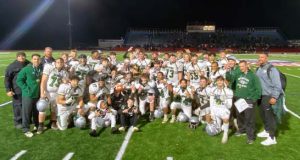 The Minisink Valley Varsity Football Team beat Cornwall, the two-time state champions, in the Section IX championship game tonight, by a score of 13-7!

The Warriors took an early lead of 13-0 and controlled the game for the first half. Cornwall finally got on the scoreboard with a passing touchdown in the third quarter.

However, the Warriors controlled the game clock by dominating the time of possession in the second half to secure the championship.

The offensive Most Valuable Player (MVP) was Junior Ethan Gallo!

The last time the varsity football team won a sectional title was in 1999, when it beat Port Jervis.

The team will play Rye High School from Section I next Friday, Nov. 19 at 6 p.m.  in Middletown at Faller Field, in the regional championship game.