Zack Ryder was named Varsity 845 Wrestler of the Year.

Zack, a sophomore, had a tremendous year, winning his 100th career match,  earning a third section title and a second NYSPHSAA individual championship at 160 pounds. He helped guide the Warriors to a NYSPHSAA Division I dual-meet championship win.

“If you include last year’s unofficial state tournament Zack, won his third in a row,” said Head Coach Kevin Gallagher.

As a seventh- grader Zack finished second in the State at 106 lbs.; in his 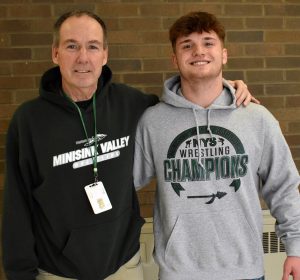 “Zack is not only a great wrestler but a great teammate and role model for younger wrestlers in our program and beyond,” Coach Gallagher added.

Coach Gallagher was named Coach of the Year.

Under his leadership, Minisink Valley tied the Section IX record with most Division I section champions (eight) this season. As a team, the Warriors won the 2021-22 NYSPHSAA Division I Dual Meet Championship and went 29-0 in dual meets during the season. Individually, they saw three state champions at the individual championships in Albany with P.J. Duke, Zack Ryder and Ethan Gallo all winning their respective weight classes.