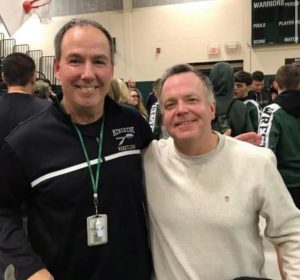 Coach Gallagher noted, in published reports, he’s had so many great wrestlers and coaches to work with him over the years. He stressed how important his students and coaches are to the team’s overall success throughout the years, thanking them and the community, his family and district administration for their ongoing support.

The previous record of 529 wins was held by Don Blaine, the former Cornwall High School coach, who attended the Minisink Valley/Valley Central match to watch his record be broken.

In published reports, Coach Blaine said if anyone was to break his record, no one was more deserving than Coach Gallagher.

“This is a tremendous accomplishment that few wrestling coaches ever achieve,” said Athletic Director Tim Bult. “Coach Gallagher is one of the finest, hardest working coaches there is, and he’s dedicated to his students’ success. His commitment to them and to the sport of high school wrestling is why Minisink Valley has become the wrestling powerhouse it is. We are all very thrilled to see him reach this wonderful coaching milestone.”