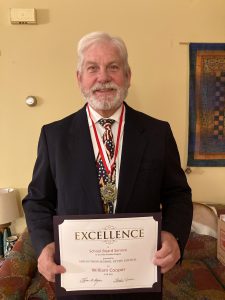 Mr. Cooper is a recipient of the Council’s Award for Excellence in School Board Service. He was first elected to the Board of Education in 2010.

“He is my wingman, supporting the vital role the Board of Education serves in this community,” Board of Education President Joseph Flaherty wrote in his nomination letter. “During difficult financial times in the district, he was there to support our work with great tenacity. During this past pandemic year, he equally supported the critical role the board had with equal resolve.  He serves on numerous board committees, providing guidance and leadership for the many challenges and issues we address. His leadership role is thoughtful, thorough and, frankly, selfless. He does this because of his belief in the power of education and what that can offer a student…and our society.” 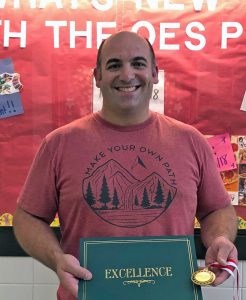 Mr Galligan is a recipient of the Council’s Award of Excellence in Volunteerism.

“While his first love is the Otisville Elementary school community, Mr. Galligan has added district-wide volunteerism to his portfolio of community service,” Superintendent Brian Monahan wrote in his nomination letter. “Not only is he the PTO president at Otisville, but he is the president of the Minisink Valley  Executive PTO, providing critical volunteer guidance to both boards. He’s also a member of Minisink Valley’s American Rescue Plan and Reopening Committees, providing valuable community support and feedback of our important work.”

Mr. Monahan added: “Most importantly, Mr. Galligan does this with a zest for success….and a smile on his face. He is every superintendent’s wish: To have dedicated members of the community to help in our mission.” 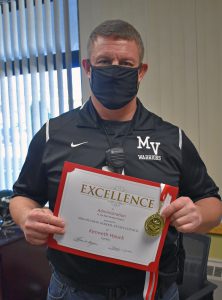 Mr. Hauck is the recipient of the Council’s Award of Excellence in Administration.

“Mr. Hauck is among the rare breed of individuals who has spent his entire professional life working at Minisink Valley,” wrote Mr. Monahan in his nomination letter. “He’s also spent his entire life living in this community,  Mr. Hauck understands this community far better than most. Attending school here and living here have also been keys to his administrative success. Our students and faculty look to him as their ‘North Star’ to guide them during good and challenging times.”

In his nomination letter, BOE President Flaherty added: “It’s uncommon for a principal to be a lifelong employee of the district, but Minisink Valley has been Ken’s only employer. There’s a reason why we want him here: He’s a proven leader with an outstanding work ethic and commitment to student success and achievement. We will make it our business to keep him here for the duration of his professional career, this is how much the entire Board of Education respects the work he does.”

Due to current pandemic restrictions the Council was unable to hold an in-person event this year, but medals and certificates were presented to them.