Author Cheryl Wills, the nationally recognized award-winning television personality for Spectrum News’ flagship national news network, New York 1, visited Otisville Elementary fourth and fifth-graders today, Jan. 10, and spoke about her great-great-great grandfather Sandy Wills, who was a slave and fought for his freedom in the Army during the Civil War. 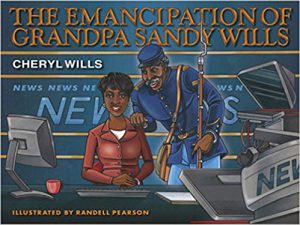 Ms. Wills —- who has played herself in NBC’s “Law & Order: Special Victim’s Unit,” CBS “Golden Boy” and has appeared in major motion pictures such as “Ghostbusters,” “Freedom Land,” starring Samuel Jackson and “The Brave One,” with Jodie Foster and Terrence Howard — read students her book, “The Emancipation of Grandpa Sandy Wills,” which told the story about what it was like to be a slave and sold to a cotton plantation at the age of 10.

The highlight of the presentation was when Ms. Wills unveiled a signed copy of the Emancipation Proclamation signed by President Abraham Lincoln!

See more photos of her presentation to students on the district’s Facebook page!