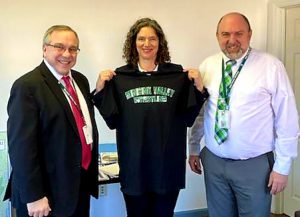 As the work continues in the development of Minisink Valley’s 2020-21 proposed school budget, Minisink Valley Superintendent Brian Monahan and Assistant Superintendent Patrick Witherow met with State Sen. Jen Metzger on Feb. 14 to reinforce the need for her help to ensure Minisink Valley gets its fair share of state aid as state officials continue to work on finalizing the state’s budget.

However, these are very preliminary state aid projections and are one of many financial pieces used in the development of the school budget. They will change. Mr. Monahan and Mr. Witherow stressed to the senator how important it is for Minisink Valley’s state aid to be increased.

For two years in a row, the district has seen flat to negative state aid growth.  Negative state aid, coupled with the now permanent tax cap, make it extremely difficult for the district to maintain its program while faced with increasing contractual expenditure obligations.

Mr. Monahan and Mr. Witherow also reminded Sen. Metzger, who covers the 42nd Senatorial District which includes the school district, that Minisink Valley is short $3,223,930 in Foundation Aid. The district is only funded to 89 percent of its full foundation aid calculation. The Foundation Aid formula generates a dollar amount that is supposed to represent the total need, based on current wealth and demographics.

Additionally, Mr. Monahan and Mr. Witherow reminded Sen. Metzger that Minisink Valley is owed prior year adjustment (PYA) payments totaling $828,323.  They told her Minisink Valley needs to move to the top of the payment list to assist in revenue generation.

They also asked the senator to maximize the awarding of grant money to Minisink Valley to supplement instructional program funding. Prior year amounts have been miniscule.

Additional meetings with elected officials are in place

Previously, Mr. Monahan met with 99th District Assemblyman Colin Schmitt to discuss the same issues. He pledged his support to communicate the need for increased state aid for Minisink Valley to his legislative colleagues.

“We are confident Sen. Metzger understands Minisink Valley’s issues and we believe she intends to communicate our issues to her colleagues in order to address the state aid inequities we have been experiencing in the past years,” Mr. Monahan added.