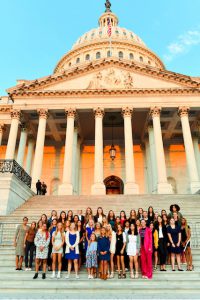 Freshman Jaida Macaluso was one of five New York State female wrestlers recently selected to join 80 of her peers in Washington, D.C. to encourage the sanctioning of girls wrestling as part of Girls Wrestling Advocacy Day, suggesting to officials that Minisink Valley’s creation of a new girls wrestling team this winter season was an example for others to follow.

That gathering was also part of ongoing national activities by different organizations marking the 50th anniversary of Title IX. Enacted as part of the Education Amendments of 1972, Title IX protects people from discrimination based on sex in education programs or activities that receive federal financial assistance. This gender equity law made a lasting impact by also increasing the participation of girls and women in athletics.

The New York State Public High School Athletic Association  granted emerging sport status to girls wrestling this past July, and Minisink Valley is one of a small group of school districts creating a varsity girls wrestling team this winter season.

NYSPHSAA will develop a girls wrestling state championship tournament after six of the 11 statewide athletic sections have at least four teams competing in girls wrestling. However, the timeframe for this has yet to be determined.

Nationally, the participation of girls in wrestling continues to climb, with an estimated 28,500 participants in the 2019-20 season, according to data collected from the National Wrestling Coaches Association and state high school associations by the USA Wrestling Girls High School Development Committee. 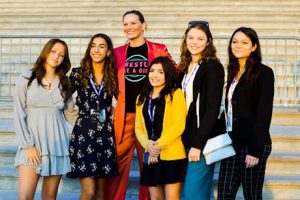 Jaida —  who began wrestling at age 5 —  and her peers shared their stories, advocated for change and asked New York State congressional officials to engage at the state level for approval of girls wrestling as a sanctioned sport. Joining the 140 people who took part in advocacy efforts was Sally Roberts, national champion wrestler, and founder of non-profit “Wrestle Like a Girl.”

“Last year I had a successful modified season wrestling all boys with nine wins and only one loss,” said Jaida, who has two older sisters who wrestled for Minisink Valley and were the first two girls to place in Division I, Section IX tournaments.  “This year, I’m excited for the opportunity to be on Minisink’s first girls wrestling team. Even though I grew up competing against boys in Jiu Jitsu and wrestling, I would prefer to wrestle girls now that I’m in high school.”

“We’re happy to be part of the national effort to break another sports barrier,” he said. “We’ve been watching colleges and universities launch their own women’s wrestling teams and offering scholarships to build superior teams. Women’s wrestling became an Olympic sport in 2004. We knew interest in this team and individual sport would filter down to the high school level and we’re thrilled to be the leader in bringing this to Orange County, with Coach Gallagher — the best coach there is — to be serving as the team’s coach this season.”