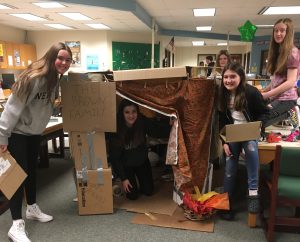 Making meaningful connections to history through unique class projects and sharing that knowledge with other students reinforces class and life lessons.  Lauren Keppler’s eighth-grade social studies honors class had a recent taste of doing just that when they experienced the challenges of the Great Depression and created their own “Hooverville.” 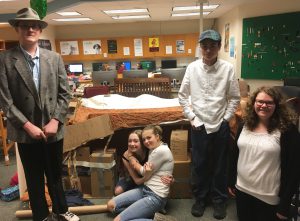 from crates, cardboard, scraps of metal or whatever materials were available. They usually had a small stove, bedding and some basic cooking appliances.

Often, Hoovervilles were located near soup kitchens. While they also often trespassed on private property, they were frequently tolerated or ignored out of necessity. 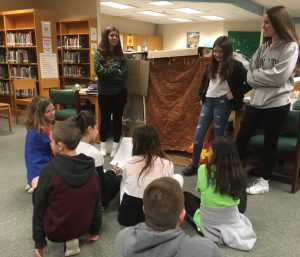 Hoovervilles were named after President Herbert Hoover, who was office at the time and who historians hold accountable for the Great Depression. There were hundreds of Hoovervilles throughout the nation during the 1930s and hundreds of thousands of people lived in these slum-like towns.

The class project was….

A foreclosure notice on Mrs. Keppler’s classroom door began the process of students experiencing what was happened to many people during the Great Depression.  The class needed to figure out a series of coded messages that 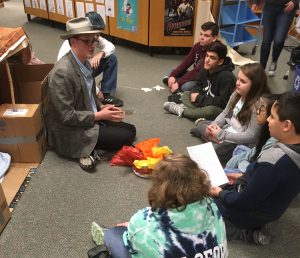 lead them around the school, using authentic hobo codes from the 1930s.

There were several stops along the way, including classrooms where they had to stop and interact with teachers and students in “Hooverville character” to find their way to a safe place to camp.

Eventually, the class ended up at the library where they set up camp for the rest of the week.  Students were divided into four groups, or families, and each had to assume the roles they were given.

With their families, students used cardboard boxes and other recycled items to build their Hooverville home, bartering with others for additional materials. 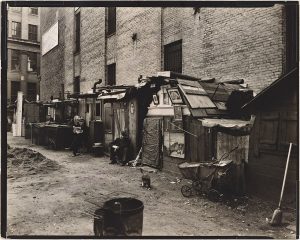 By week’s end, each family needed to build a structure with a roof that could house their entire group.

As part of intra-school connections, Kathy Ferrier’s sixth-grade social studies class visited Hooverville with questions which the eighth-graders were required to respond to as real “Hooverville” residents. In character, they spoke about relying on public charities, begging for food and being unemployed…life struggles which many hope to never experience.

Hoovervilles were eradicated when the economy recovered and unemployment rates fell.