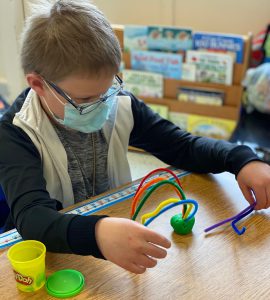 Irish folklore says rainbows represent a promise for the Earth to not be destroyed by floods.  Plus, according to folklore: If you catch a leprechaun, you can force him to tell you where he hid his pot of gold (coins), which is somewhere at the end of a rainbow.

With that in mind, and because a big piece of STEM learning is design and problem solving, students were asked figure out how to build their rainbows. They had a chance to practice using their fine motor skills when working with the pipe cleaners and Play-Doh. 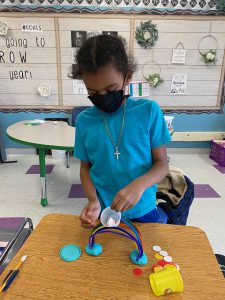 Afterward, they made seasonal connections with “a leprechaun’s pot of gold” coins, placing plastic cups (pots of gold)  at the center of the rainbows’ arcs. Students then slowly added one plastic coin at time to their cups until the arcs collapsed.

“They were challenged to see how many ‘coins’ they can hold on their rainbows before tipping over,” said Mrs. Paglia.

Students could adjust their designs before testing them again to see if there was any improvement in the strength of their rainbows, which would allow more coins to be added to their cups.

In addition to the simple physics lesson involved, math work was also part of it. 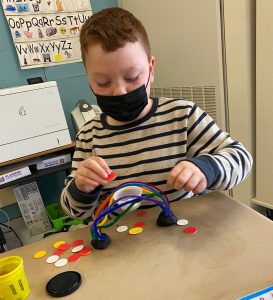 How many coins could be kept in the cup? If the rainbow was redesigned, how many more coins could the cup hold?

There was an opportunity to talk about the science behind the colors of rainbows, too.  (Did you know a rainbow is a meteorological phenomenon caused by reflection, refraction and dispersion of light in water droplets, resulting in a spectrum of light appearing in the sky?)

Plus, art was part of the lesson, with students reminded of a rainbow’s colors, and the sequencing order of those colors, or “ROY G BIV,” an acronym for the hues making up a rainbow: Red, orange, yellow, green, blue, indigo and violet.

Students then used their knowledge of those colors to make connections with a specific color and word, later reading  and writing those words on special posters.

However, what’s not known was if any leprechaun mischief got in the way of students’ learning!