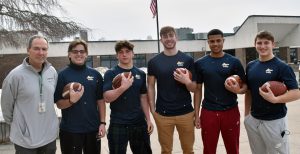 “This core group of guys is a big reason we won the Section IX Championship this year,” said Head Coach Kevin Gallagher. “These five guys are not only great football players, but great young men.”

Among those named to the first-team was offense was kicker Clayton Fogler. Teammate Ethan Gallo was named to first-team defense.

“Clayton was ‘Mr. Automatic’ for the past three years and is now one of Minisink’s all-time leader in scoring,” said Coach Gallagher. “Clayton hopes to be kicking for St Lawrence University next year.  Ethan was not only a run stopper, but could cover people against the pass. Ethan also set the new rushing record for Minisink Valley with over 1,300 yards. Ethan will be back again next year.”

“Kai was also voted Class A Scholar Player of the Year, a first for Minisink Valley,” he said. “Kai has also signed to play quarterback at Princeton University next year.

“Mikey is a gifted athlete with speed and strength that caused chaos in most opposing teams’ backfields,” said Coach Gallagher. “Mikey also was a key to our offense as one of our running backs. Mikey is not sure if he will wrestle or play football in college next year.”

He added: “Tyler, or ‘TMack,’ was always one of the best athletes on the field. Tyler played all over the field for us, on defense he played both defensive end and outside line back where he led the team in fumbles caused and even had an interception return for a touchdown. Tyler was also a force on offense as a receiver. ‘TMack’ has been offered scholarships at a few schools and has narrowed it down and is leaning toward AIC in Massachusetts.”