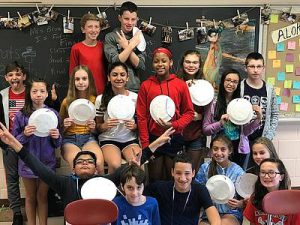 What better way to end the last official day of school in the Minisink Valley K-8 buildings than by sharing an important last lesson from Joanna Browning’s sixth-grade math class which can apply to anyone: The importance of being kind.

“For many, this was the last lesson of sixth-grade math, but perhaps the most important,” she said. “We started the class with a survey asking students who had ever had someone say something unkind or mean to them.”

Every hand in the class went up.

Who has said something unkind or mean to someone else?

Every hand went up.

Next, each student wrote his or her name on a paper plate and picked a color ribbon to tie it so that it would hang like a backwards necklace.  They were told to go to each student in the class and write something nice or kind about that person.

You make me smile.

You are a good friend.

You are fun to be around.

“They did not need to sign their name to their comment,” said Mrs. Browning. “When everyone had written on everyone else’s plate, they were asked to sit back down and read what others have to say about them behind their backs. They were reminded to remember the things that others say about them behind their backs and not always what is said to their face because …. this is what your classmates really think about you.”

She added: “The smiles were so big and eyes so wide when they began to read their classmates comments.”

One student sat quietly and a huge smile appeared on her face, according to Mrs. Browning, as she read to herself:  “OMG, someone thinks I’m pretty!”

Others commented on how they are going to hang their plates in their rooms at home.

“There were others who sat quietly reading and their expressions said it all,” she said. “You could tell how much even one word ‘kind,’ ‘funny’ or ‘nice’ written in a classmate’s handwriting made them feel like they were on the top of the world inside.”