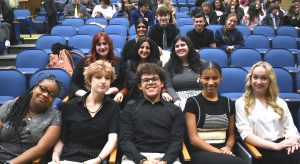 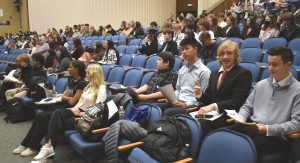 Twelve school districts sent student groups to participate in the gathering, which was inspired by Katherine St. George, former chairman of the Orange County Republican Committee and member of the U.S. House of Representatives.

While addressing an Orange County Hi-Y Assembly in 1942, Mrs. St. George related that she “found people well acquainted with national politics but woefully lacking in an understanding of how their local town and county governments functioned” and appealed for a greater interest in local government.

In 1944, the Youth-in-Government program was inaugurated through the guidance of Amy Bull Crist, Orange County superintendent of schools, for whom the organization is named.

Students engage at a very real political party level at the Platform Convention for Youth-in-Government. By making “planks” for committees based on economics, foreign policy, social issues, environmental, New York, and Orange County and debating them against other delegates in committee, students gain valuable life skills applicable beyond the learning spectrum.

Each party’s platform is broken down into “planks,” or declarations that speak to each specific issue. Party platforms and their planks are important to the electoral process: They give the candidates a clear political position with which they can campaign.

County Service Day is the culmination of many students’ endless hours of work toward the goal of a better understanding of government processes.