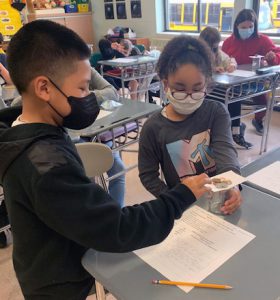 Dropping coins into an empty beaker sounds simple.  But, taking the idea  and applying it to a sixth-grade physics lesson is creative, and another way Minisink Valley faculty make learning fun.

Andrea Ferguson’s sixth-graders recently took the concepts of inertia, motion and gravity and applied them to pocket change!

Students began by watching a demonstration using a long chain of beaded necklaces joined together and saw that inertia, force, and motion are connected. All it took was a slight tug and the string of beads literally pulled itself out of the container and onto the floor in a matter of seconds. 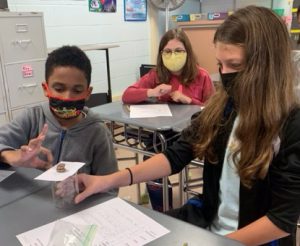 This is because of inertia, and as the sixth-graders now know, the law of inertia is the resistance of any physical object to any change in its state of motion. Additionally, Newton’s first law of motion states an object at rest will stay at rest unless an outside force (the slight tug) acts upon it.  An object that is moving will stay moving until something stops.

To demonstrate this law further, classes did a lab activity using coins, a beaker and an index card. 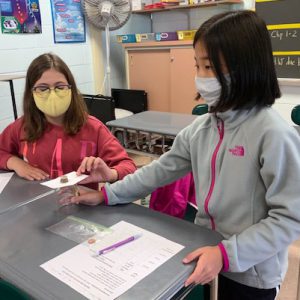 An index card was placed on top of a beaker, with coins placed on the index card. The goal was to flick, or pull, the index card out from under the coins, allowing gravity (an outside force) to act on it and drop it into the beaker.  The flick is the force that sends the cardboard into motion, but this force was not acted on the coins. Instead, gravity drops them straight down into the cup below. The bottom of the beaker stops the coins from falling.

If students flick, or pull, the index card correctly, it simply slides out from 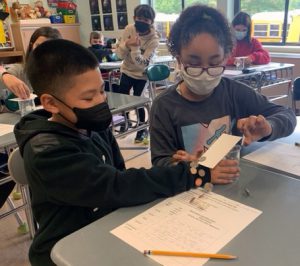 between the beaker and the coins.

But, coins have inertia, meaning they really want to stay in one place.  If students move the card slowly, it isn’t fast enough to overcome force.  If they flick quickly, the coins stay in one place and then drop into the beaker.

“Lots of coins went flying and lots of coins dropped into the beaker,” Mrs. Ferguson said. “Lots of learning and fun was had by all.”