Awareness of, respect for and education about different cultures are lessons that take place throughout the school year at Minisink Valley, and particularly during specific months of the year when there’s official government recognitions.

Innovative faculty are using National Hispanic Heritage Month (which runs from Sept. 15 to Oct. 15) as an occasion to create interesting lesson opportunities about the histories, cultures and contributions of American citizens whose ancestors came from Spain, Mexico, the Caribbean and Central and South America,  as well as other educational and fun activities.

For example, at the high school, the World Language Department faculty have been engaging students in different activities to highlight this subject matter. Students researched and presented on Google slides individuals of their choice, like Sonia Sotomayor, Roberto Clemente and others They also made paper flowers and used flags from these countries to decorate the corridor. 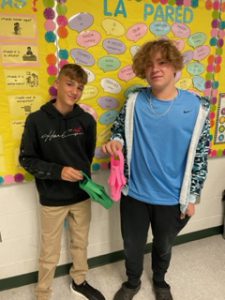 At the middle school, Jackie Mazariegos’ Spanish classes have been spending time talking about the history of Central American countries, Mexico and their independence days.

Classes spoke about María Dolores Bedoya, a Guatemalan woman and activist in the 1800s. She traveled the streets of Guatemala City lighting her path with a candle and urging people to gather outside the town hall where the independence of the Central American countries was being discussed. Students made “faroles” (lanterns) to recognition of Lantern Parades held by several  Central American countries.

Also as examples, students in the district’s elementary buildings have lessons tied to Hispanic heritage awareness as well. 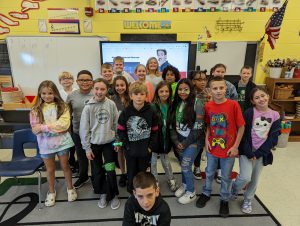 At the Intermediate school, Andrew Fisher’s music students have learned about Lin-Manuel Miranda, the composer, writer and actor, known for his work on “Hamilton,” “In the Heights,” “Moana” and “Encanto.” He is also the winner of a Pulitzer Prize and his varied advocacy efforts include the creation of a Puerto Rico relief fund to benefit families in 2017 after Hurricane Maria. 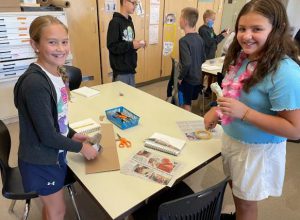 Otisville art teacher Kara Welsh’s fifth-grade art students have been learning about El Salvadoran contemporary artist Guadalupe Maravilla, who uses his own life experiences to inspire his series “Disease Throwers.” He takes his journey to America as a child and his experience battling cancer as an adult and weaves them together to create sculptures and “sound baths” that promote healing.

As part of their lesson, students are making armatures (the structure underneath a sculpture) that they will cover with plaster gauze and paint. The armatures are made from newspaper, cardboard, masking tape, wire, Styrofoam, or found objects. These sculptures are of objects that symbolize a specific memory or time in the artist’s life. 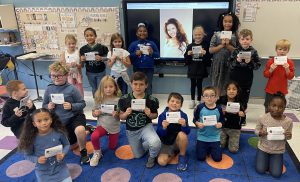 At Minisink Valley Elementary, Megan St. Clair’s students learned about singer Selena Quintanilla, “Queen of Tejano Music,” making  booklets about her life; listening to the bilingual “The Life of Selena”/”La Vida de Selena” book; and finishing their lesson with a dance party of her greatest hits.

Hispanic Heritage Month started in 1968 as Hispanic Heritage Week under President Lyndon Johnson and was expanded by President Ronald Reagan in 1988 to cover the Sept. 15 to Oct. 15 period.  It was enacted into law on Aug. 17, 1988.