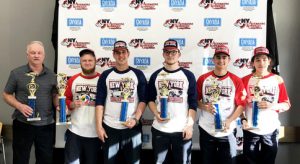 Justin and Matt, who are also students at Orange-Ulster BOCES Career and Technical Education (CTE) Academy, took the top awards at the regional competition held at The Center for Automotive Education and Training in Whitestone, New York.

Justin and his partner Kenneth Kohn of Goshen High School won first place in the two-person team event. Matt was named first place alternate and will be onsite and on standby if he needs to cover for either or them or the second place team.

The hands-on automotive competition for high school seniors included competitors from the lower Hudson Valley and New York City. Each school was allowed to send two teams of two students and one alternate.

Students demonstrated their skills as auto technicians by fixing issues on a wide range of car makes and models across 10 different work stations. The nationally recognized competition was created by GNYADA to draw attention to well-paying automotive technician job opportunities and reinforce to interested students that there are rewarding careers in the auto industry.

The idea, he added, was to test competitors’ ability to address any mechanical, electrical or related issue that could come up in a vehicle.

To prepare for the state competition, Justin and his partner are practicing on a 2019 Chevrolet Malibu, sponsored by Healey Chevrolet of Middletown.

“We’re working on cars that have less than a 1,000 miles on them,” said Justin, who is currently planning to attend the Pennsylvania College of Technology in Williamsport to study diesel technology.

Getting the attention of colleges and employers

“It (the competition) is going to help me with college,” he added. “This will definitely get me the attention of colleges and employers.”

As the alternate, Matt is splitting his time and practicing with Justin’s team and the team working on a 2019 Toyota Camry, sponsored by Johnstons Toyota in New Hampton.

“I have to learn both cars,” said Matt. “The alternate competitor has to have the ability to takeover for anyone.”

Matt is focused on getting a job with an auto dealership after graduation. His first choice is a position with BMW.

“I like that this has put my foot in the door with some dealerships,” said Matt, who plans to become certified for automotive service excellence (ASE) by the National Institute for Automotive Service Excellence.  “We are months ahead of everyone else in BOCES (as a result of the competition work). This gives me the training I need. I’ve been working on cars for three years now and my career is going in the right direction.”

CTE Director Orande Daring said the students and their instructors put in countless hours to prepare for the competition.

“We are proud of all of them not only for their achievements, but also for their tremendous efforts and determination to succeed,” he added in a statement. “We are also truly thankful to our local business partners for their support.”

Orange-Ulster BOCES’ CTE programs give students the opportunity to graduate from high school with technical experience, professional skills, national industry certifications, and college credit in a wide variety of high-demand occupations. Programs are held on two campuses in Goshen.

The talented students also won scholarships to auto technology schools. The state winner would become the Greater New York representative at the National Auto Technology Competition. The finals, where over $3 million in prizes and scholarships is at stake, will be judged before a live audience at the 2019 New York International Auto Show in April.