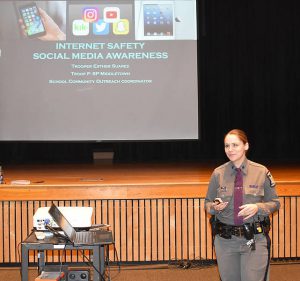 The assemblies are part of the Minisink Valley School District’s ongoing commitment to character education, an important part of students’ social and emotional development.

Misuse can create a lot of problems

Trooper Suarez, the school community outreach coordinator for Troop F-SP,  acknowledged when social media platforms and apps are used the right way, they can be fun.

But the fun ends when people misuse those platforms and apps to cyberbully people. Even worse, she said, is when predators disguise themselves in an effort begin conversations.

“Don’t interact with someone you don’t know,” she warned the group. “Bad things happen. They will want to talk to you about inappropriate things.”

Facebook is not a popular platform anymore for students, Trooper Suarez admitted, with Instagram and apps like Snap Chat and Tik Tok getting students’ attention and use.  Through a show of hands, hundreds of students admitted they had more than 500 followers or more on Instagram. One student acknowledged more than 2,000 followers.

Likewise, Snap Chat can have its own dangers.

‘Our State Police Computer Crime Unit can find anything online.’

“It’s a false sense of security,” Trooper Suarez said. “Messages never disappear. You think you’re sending a message that you don’t want, say, your parents to see and you think it’s safe to do this, in this way? You’re wrong.  Our State Police Computer Crime Unit can find anything online. Their job is to pull up anything that’s been deleted. What you post is forever permanent.  There are a lot of people who will encourage you to communicate this way. It’s so dangerous.”

Trooper Suarez reminded students that predators find ways to flatter those they choose to prey upon. That could eventually lead into a discussion of mature, adult topics; the sending of revealing photos; keeping secrets; and even blackmail.

This can also happen though online gaming.

“If I were a predator, I would pretend I love the game just to get your attention,” she said. “But, I could care less about the game. It’s you. I may send you a message, and try to move you onto one of the other apps to continue a conversation. As long as a game has a feature that allows for communication and someone can talk to you, it can be a problem. And, it can be anyone of any age, male or female. It doesn’t have to be the ‘stereotypical old man.’”

Trooper Suarez continued to warn students to be aware and vigilant of what they do online.

“If something happens to you, and you don’t speak up, this situation could last for years,” she said.  “Tell your parents or someone you trust and get help. And, remember this, if you see someone engaging in bullying, remember you have no idea what’s going on the other side. You have no idea what the (bullied) person is going through.”

She reminded students their future employers can ask for lists of and passwords to their social media platforms to learn more about the type of person they are.

“Sure, you have the right to say ‘no,’” Trooper Suarez said. “But, do you think they’d really want to hire you then?”

Make good choices and have no regrets

She also spoke about the poor choices people make with their social media postings, showing students a three-minute video called, “Two Kinds of Stupid.” The video told the story of a high school student with a promising swimming scholarship opportunity lose everything when he participated in inappropriate activities and then posted photos of those activities online.

Before dismissing students, Assistant Principal Stephen Caldwell held up his personal cell phone and told students: “You can hurt a lot of people with these devices. Our idea of providing training to you is so that you know if you think you are okay doing these (bad) things (on portable devices) to know that this is definitely not okay.”

Seventh-grader Wesley Mardyniak, who has the Tik Tok app, said he understood people should only use social media for the right reasons.

But sixth-grader Natalie Deoragh said she previously deleted her Snap Chat account because there was too much drama associated with users.

She added: “If I see someone being bullied, I would definitely stand up for them.”