The middle school community will soon see a tree adorned with large, brightly painted stars in the front of its main entrance, thanks to the efforts of a group of students looking to reinforce the importance of giving, empathy and the power of words and designs while expressing compassion.

These stars will just be temporarily displayed, however, because they will eventually be given to others.  They are part of a growing “pay it forward” service movement seeking to bring hope and healing to anyone who needs it. 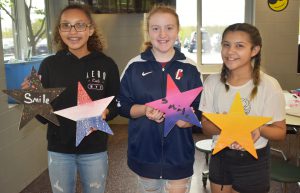 Stars of HOPE is not an arts and crafts project. Rather, the stars’ intent is a global one.  Is there a community member who needs hope?

Or, is there someone or a group nationally or internationally who can benefit from the stars’ messages?

Students are challenged to think of words, expressions or designs that can lift the spirits of the people who will be the recipients of these messaged stars. The Stars of HOPE organization believes the stars will remind them that people care about them and what’s happened to them. 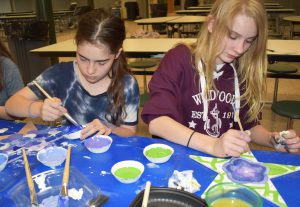 In 2007, Stars of HOPE was launched by the Parness family of New York who wanted to acknowledge the love New York City received from people all around the world following 9/11; and the Vincent family of Groesbeck, Texas who wanted to pay it forward for the support they received when “New York Says Thank You” volunteers rebuilt their home following a deadly tornado.

Now, Minisink Valley Middle School students are joining over 90,000 volunteers who have transformed 220 communities in 26 countries impacted by disaster and tragedy with messages of hope, healing and resilience.

“Our students’ stars will be given to people who need peace and hope after their display period has concluded,” said Christine Cesarz, the middle school’s PTO chairperson, who learned about the program several years ago while in California and is leading the effort.  “There is an opportunity for Minisink’s stars to be displayed at the 9/11 Memorial in New York in May. This is a wonderful opportunity for us to demonstrate Minisink Valley’s commitment to thinking about others less fortunate and being good and caring citizens.” 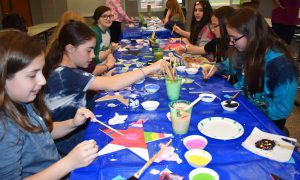 Mrs. Cesarz hopes to build on the middle school’s initial star creation efforts and envisions stars adorning many trees on district’s main campus before being passed along to recipients.

A group of students recently spent an afternoon painting stars and adorning them with various messages of hope.

‘…It helps people be stronger.’

“I have family in Puerto Rico when the hurricane went through,” said seventh-grader Adyson Simmons, as one of the reasons she supports this effort.  “It really motivated me to do nice things for the community. I’ve seen poor people living on the side of the street when I lived in Middletown.” 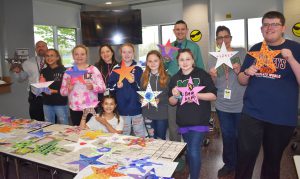 Sixth-grader Kayleigh Bosch also felt the star project offered students a chance to give back.

“Stars of HOPE is important because it helps people be stronger,” she added.

“You want to make people smile and be happy with your stars,” said seventh-grader Samantha Rhodes. ‘They’re all so unique.”

Seventh-grader Rachael Cesarz agreed, adding: “People in different places need to have hope and giving them these positive words will hopefully make them smile.”

Principal Michael Larsen praised their work and noted this is only one of many different things the middle school community does throughout the year to reinforce the important character traits of kindness, compassion and respect for others.

“These kids make me so proud,” he added. “Being a kind, compassionate, giving and empathic member of our community and greater society is important and our students demonstrate this every day.”