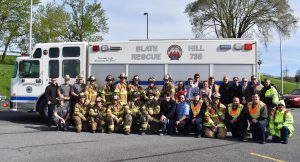 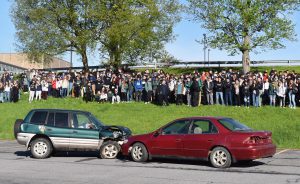 The accident simulation was of a two car collusion, caused by drunk driving. Students watched what police, fire and medical responders do when arriving to a crash site. 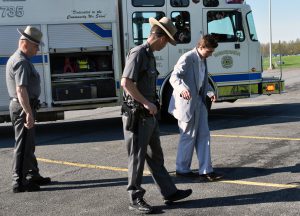 In this simulation, police checked the sobriety level of the driver and arrested him.

Concurrently, firefighters used extrication equipment to free victims of both vehicles.  Emergency medical technicians provided on site treatment and prepped victims to go to the hospital.

However, two other victims were non-responsive and could not be saved. 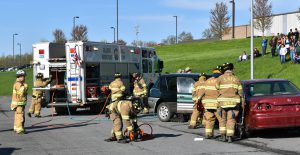 The intent was to show students the tragic consequences of speeding, driving while impaired or intoxicated and/or distracted driving —such as texting — to anyone who is newly licensed with limited driving experience or drivers who may not realize their actions can have significant negative outcomes.

School officials stressed how important it is to make always good decisions when driving and how bad choices can have a lifetime impact on many people. 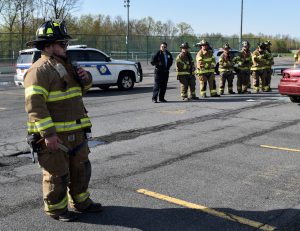 Senior Michael Ortiz, who was recently named the Wawayanda Fire Department/Slate Hill Fire District’s “2019 Firefighter of the Year,” participated in the simulation and at its conclusion told students: “I have been to calls like this. This DOES happen. Don’t let this happen to you. Make good choices when you get behind the wheel.”

Thank you to the New York State Police, the Slate Hill Fire Department, Mobile Life Support Services and student actors representing the high school’s Drama Club for their involvement and efforts to make this mock crash so realistic.