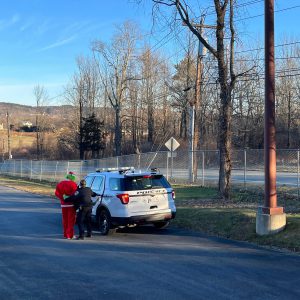 The district wishes to thank the Mount Hope Police Department for apprehending a “grinchy grinch” who was attempting to steal Otisville Elementary School’s holiday decorations. 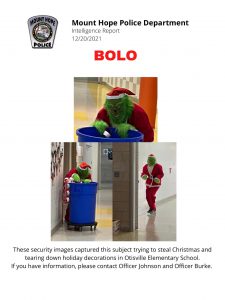 The police department quickly issued a “Be on the Look Out” (BOLO ) alert, asking for the community’s help.

Shortly after, surveillance footage was secured from within the building and released to the public, showing the alleged suspect in action at the school.

The footage also captured the subject’s arrest by Officer Johnson. The subject was apprehended without incident.

We are grateful to the Mount Hope Police Department and Officers Johnson and Burke for their quick work to resolve this matter.