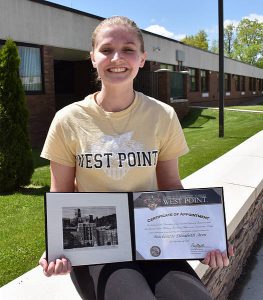 In just a few weeks, senior MacKenzie Arns will be among only a handful of Minisink Valley graduates to enter the prestigious U.S. Military Academy at West Point, and she’s more than ready.

“We applied last August and I feel like we’ve never stopped,” said MacKenzie, who aspires to become a chemical engineer. She considered West Point and the U.S. Air Force Academy in Colorado but “I decided on West Point because I feel I have more of an affinity to the Army and it has a better engineering program. I want to study alternative fueling or nuclear fusion.”

MacKenzie’s interest in the military comes from her family and friends, some of who are members of the National Guard Reserve.

‘I want to serve my country…’

Additionally, she and her family also regularly participate in Civil War Reenactments all over the Northeast, as members of the 5th New York Veteran Volunteer Infantry Regiment. This Union Army regiment was known as “Duryea’s Zouaves,” and was one of the more colorful units of the Civil War.  The Zouaves, a light infantry dressed in bright quasi-Moroccan style, inspired some American militia unit uniforms, though that faded by the war’s end.

Through that connection, MacKenzie became even more interested in the military. Her many interests also include being a member of the Orange County Civil Air Patrol, where she is an element leader.

“I’m excited for this (going to West Point),” she said. “I want to serve my country and I’m okay with my decision. I don’t think it’s for everyone, though. I think it is a calling.”

Nominations needed from a U.S. senator or congressman

Being selected is an arduous process, MacKenzie explained.

The first application to be approved is one which allows a candidate to “officially” apply.

Then, a candidate’s physical health must be determined via an assessment through the Department of Defense Medical Exam Review Board.  Physical fitness was determined though the review of videos she was required to submit along with an assessment by her fitness abilities by physical education teacher.

MacKenzie passed those two critical checkpoints. Next were comprehensive and separate interviews with staff representing U.S.  Sen. Chuck Schumer, U.S. Sen. Kirsten Gillibrand, and U.S. Rep. Sean Patrick Maloney in New York City and Westchester County.  Each is authorized to nominate up to 10 people each for an available cadet slot.

She was awarded one slot from Sen. Schumer and two slots from Congressman Maloney. On Feb. 2, MacKenzie learned, via the West Point portal, that she was an official nominee.

However, being nominated doesn’t mean an acceptance. West Point officials next review each candidate’s credentials and nominations and determine who will be offered an appointment, who might be wait-listed or who may not be not be accepted.

On Feb. 9, she was offered a formal appointment.

After she accepted her appointment, next steps included passing a federal background check, the submission of fingerprints and  reference lists as well as completing a  tremendous amount of paperwork.

“I had a lot of help from Minisink Valley,” said MacKenzie. “Everybody really came together to help, especially my mom. I could not have done this on my own. My mom is just so proud. My parents, they tell everybody they see. I think my mom already bought tickets to West Point football games. I think she’s really going to miss me.”

Upon graduation from West Point, MacKenzie – who will be commissioned as a second lieutenant — is committed to five years of active duty service, followed by three years in reserve service.

Someday, she hopes to be working for NASA, developing alternative fuels for its space program.

“I don’t know how I’ll get there, but I think I ‘ll have a good shot, being I’ll be an Academy graduate,” she added.

MacKenzie also encouraged young women to pursue a career in the military, if the desire is there.

“There are a lot of people who don’t support women in the military,” she said. “Find those people who do, and let them be your cheerleaders.”

And while these last few weeks at Minisink Valley will be hectic and a bit melancholic, MacKenzie offered this advice to students:

“I never thought I’d be going to West Point. Anything is possible. Keep going. Put the hours and time in, because something good will come out of it.”