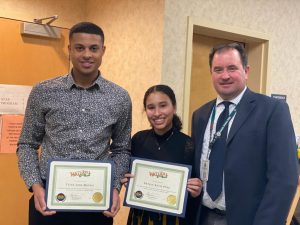 Seniors Tyler Mackie and Nataly Pena were among a group of students recently honored by the Town of Wallkill during Black History Month for embodying the qualities of William Price, the former Silver Lake fire chief who served the region for many years. 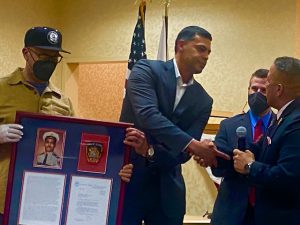 Wallkill officials said Chief Price, a World War II veteran, was loved and respected for his personal qualities, and he found success because of his hard work, skills and community activism.  He was known outside of the fire house for his work as grievance coordinator at Otisville Correctional Facility and also for his contributions to developing affordable housing for the area’s poor. 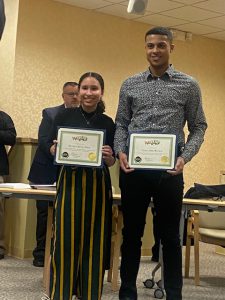 At the recent gathering, Town of Wallkill officials recognized area students who exemplify Chief Price’s leadership and community-minded qualities. Students came from all of the schools whose boundaries touch the Town of Wallkill: Minisink Valley, Pine Bush, Middletown, Valley Central and Goshen. This recognition ceremony was also part of the town’s 250th year anniversary celebration of people, events and community history.

“Nataly and Tyler clearly epitomize the qualities and values that made Chief Price the outstanding person he was in Wallkill,” said Dr. Michael Burns, assistant principal. “Like Chief Price, they understand the importance of being community-minded. They are most deserving of this recognition.”

Tyler Mackie
Tyler played the last three seasons on the varsity football team, serving as captain during his junior and senior year. He was named All-State Defensive End, placed on First Team 845 Coaches’ Poll and given Class A honorable mention honors by the New York State Sportswriters Association.  Tyler has received a full football scholarship to attend American International College in Springfield, Mass., where he will study to become a personal trainer.

Nataly Pena
Nataly is this year’s FBLA president and its former vice president. She volunteers as a peer tutor in the high school’s Counseling Center and led the National Honor Society tours at 9th grade orientation.  As a member of the National Honor Society, Natalie is involved in many community service activities, including Project Cooperation. She also works at the high school’s school store.  In addition to her community and civic involvement, Natalie is an academic powerhouse and is among the Top 10 students of the Class of 2022. She plans to study computational mathematics, but has yet to finalize her college choice.