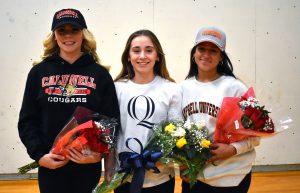 Congratulations to three Minisink Valley seniors on the recent signing of their Division I/II NCAA National Letters of Intent: 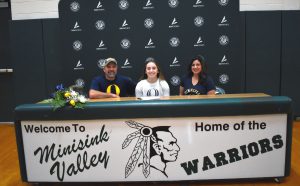 Josie Hewett, Division I acrobatics and tumbling at Quinnipiac University

Josie is a four year captain of competitive cheer team outside of school.  Her team has placed second two times at national competitions.

“Josie has put herself in this position because she works extremely hard both in the classroom and in her athletic endeavors,” said Guidance Counselor Matt Caputo. “She did things the right way and was ready to seize the opportunity when it presented itself. It’s great to see a student be deservedly rewarded for  hard work and dedication.”

Academically, Josie has maintained a  97 GPA and High Honor Roll status throughout high school  while taking a challenging college preparatory curriculum each year.  She is a member of the National Honor Society and is planning to major in occupational therapy at Quinnipiac. 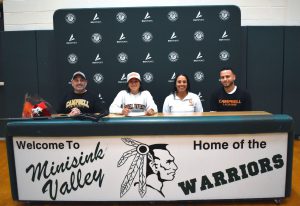 “Since Sienna has started playing in the winter indoor leagues, she has done nothing but strived to improve,” said Coach Chris Burger. “She works hard in season and harder in the off season. She actively pursues feedback and tries to implement even the smallest correction. Her only speed is ‘all out’ and has been a positive addition to our midfield, tallying 28 goals last season. We know Sienna will continue to improve, strive, grow and deliver next season and in her college career.” 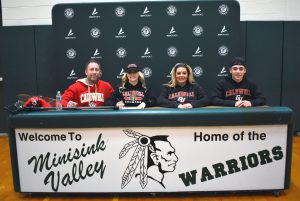 “Taylor will be a returning varsity attack player for the 2023 season,” said Coach Burger. “She is a hard-working focused player who has used her dedication and determination to rebound from injuries. During this off season, in addition to working on recovering, she worked hard enough and remained steadfast in achieving her goal to sign to play in college. We look forward to what she will be capable of achieving this season and know her drive and willing to work for what she wants will be what makes her shine in her college career.”