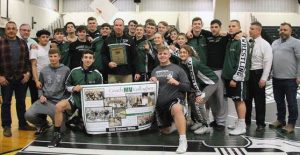 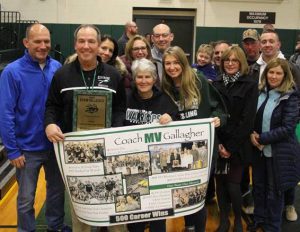 Coach Gallagher, who has coached wrestling for the last 20 years, has impressive wrestling coaching stats which demonstrate why Minisink Valley’s varsity wrestling team is a powerhouse within New York State: 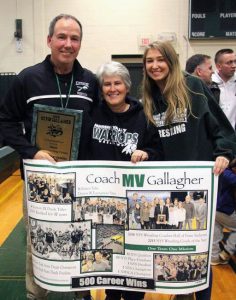 He was recognized during the match by the team, coaches, administration and alumni for this prestigious achievement.  As of Jan. 24,  Coach Gallagher had a 500-103 record!

“We are extremely proud of Coach Gallagher for earning his 500th career wrestling coaching win last week,” said Athletic Director Tim Bult. “He continues to work with our student-athletes to bring out the best in them. His teams are always well prepared and his kids are committed to success. This is a tribute to the dedication of our kids and the hard work and commitment that goes on behind- the- scenes by our coaches.”