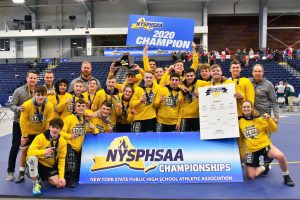 The Warriors are ranked Number 1 in New York State and were the top seeded team heading into the state championship.

In the first round, the team soundly defeated Long Island wrestling (Section XI) powerhouse Commack High School in a 57-9 match.

In the second match the team faced off against Lancaster High School, the 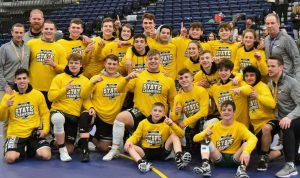 “We quickly showed them the caliber of our program with a 64-11 victory,” said Athletic Director Tim Bult.

The team advanced to the state semifinals where the Warriors met Shenendehowa High School, the Albany area Section II champions.

“We continued to dominate with a 47-27 win and advanced to the state finals,” said Mr. Bult.

In the finals, Minisink Valley was matched up well with Fulton High School, the Section III champion. 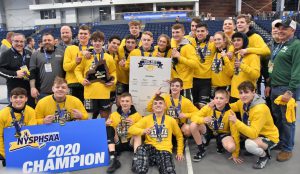 all season,” Mr. Bult said. “Our grapplers achieved their dreams of a second state championship in the last five years with a 42-25 victory.”

Mr. Bult thanked the many parents, alumni, community members and members of the district’s administration and Board of Education for traveling to Syracuse “to support the hardest working wrestlers in New York State.”

Visit the district’s Facebook page to see more photos from the championship meet.